Flowers are a traditional gift to surprise the lover or the lover. What more does "I love you" or "I think of you", than a little attention like a bouquet of flowers and a box of chocolates?

Our great quality will surprise you! Browse our range and find the gift that best suits your treasure. There is something for everyone! With our greeting card, you give the gift a personal touch.

You want to play it safe? Here you can find out more about the meaning of some flowers and their colors:

Nowadays frowned upon as an invented day of the flower industry, the Valentine's Day actually has a widespread and rooted history of Christianity:

The origin of Valentine's Day begins in the 3rd century and goes back to St. Valentine.

Bishop Valentin of Terni lived in Italy at the time, and was known for his love of flowers from his own garden. On the other hand, he secretly married couples with a Christian faith. However, Christianity was forbidden at the time, since the Emperor felt that men gave better soldiers than their husbands.

Despite his good position to the then Emperor Claudius II Valentin was executed in Rome in 269 AD because of his deeds.

How is Valentine's Day celebrated?

Valentine's Day is popular throughout the world, celebrated by loved ones, but there are regional differences.

In England, for example, anonymous love letters are sent and (finally) admits his love.

In the US, you can buy greeting cards with little love messages - who has gotten more at the end of the day, is considered the most desirable.

In most parts of Europe, however, little attention is paid, such as Flowers or chocolates to make the loved one happy.

In Japan women give their men homemade chocolate and another small attention.

The special thing is, however, that the man the day after Valentine's Day (also called "White Day") a present their women, which is three times as valuable as the gift, what they received one day before.

You get at least 7 days freshness guarantee on all flowers ordered and delivered through Regionsflorist.

Payment takes place through our secure payment page (SSL, 3D-secure) so your personal data is safe. 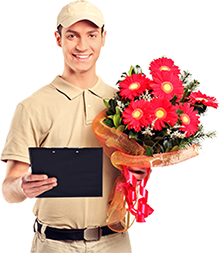